Automobilia: What We're Excited to See at the Barrett-Jackson Auction 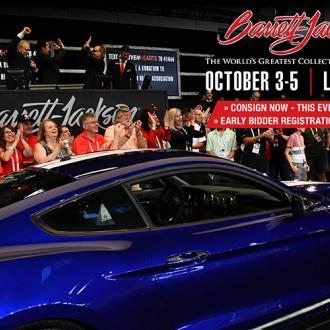 Vehicles of all types are integral to United States History, from Route 66 to the spread of interstates in the 1950s. By this era, people were able to travel in personal vehicles much more easily than ever before. Families began taking road trips, which led to imagery of vintage motels and tourist souvenirs. Car and gas companies thrived. The auto culture that came from this made the United States a hotspot for all things transportation. Automobilia refers to all of these components, much more than just the vehicles themselves. It includes all things automotive, such as dealership signs and gas station pumps. Bidders at the Barrett-Jackson auctions can even register as only automobilia bidders.

As Kersten’s Antiques heads to the Las Vegas Barrett-Jackson Auction this week for the first time, we’re highlighting some unique items that will be featured at the auction. A piece of Oklahoma history that can be found at the auction is a huge 1950s Phillips 66 porcelain with neon service station sign. Phillips 66 began in Bartlesville during the early 1900s as a petroleum company. Another gasoline related item is a gorgeous 1930s-40s Standard Gold Crown gasoline pump globe.

Some obscure transportation-novelty hybrids include a 1965 Shelby Mustang Golf Cart and a 1938 Dodge Streamliner Pedal Car with chrome and a horn. An even more rare item is a 1950s Porky coin-operated kiddie ride. It still works and it is the only one of its kind to have ever appeared in the auction. Porky would also pair nicely with the Lenaerts of Belgium Indian Motorcycle carousel ride. Just a few more of these and you’d have a full merry-go-round!

There are smaller countertop display items available for auction from the same eras and reminiscent of classic American diners. One is a 1940s hot dog display cooker that still works. Another is a 1930s dual Pepsi-Cola and Coca-Cola soda fountain dispenser. More food items include a Life Savers self-service candy machine from the 1950s and a gigantic Piggly Wiggly neon sign from the same era. These items definitely seem like things straight out of an episode of American Pickers. The Barrett-Jackson Auction has something for everyone. Whether you can bid, attend, or not, everybody can enjoy seeing the rare and mismatched collectors’ items each year. Maybe Barrett-Jackson items can inspire your own future antique searches.

The "As you Wish" Giveaway secret code entry is: S3CR3TWISH