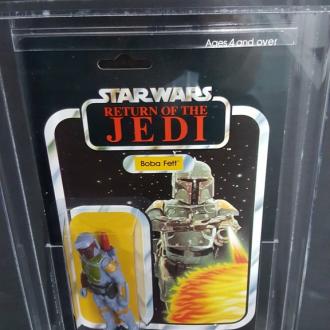 In a galaxy far far away (Mill Valley, California) in a distant time (1977) Star Wars began! Since its inception Star Wars has had a cult following, driving lifelong fans and new comers alike to seek interest in all things Star Wars. With the resurgence of the franchise, younger generations are becoming more interested in the 1970s collectibles as well as new generation memorabilia! So Kersten’s Antiques decided to dive in and explore the galaxy of Star Wars collectibles!

Ever wonder what your Star Wars collectable is worth? Ever wonder how that value is assigned? Do you know where to go to buy them, sell them, or get tem appraised? Do you know how far 12 parsecs really is? All of the questions of the galaxy are answered below…..

Earlier this year, we visited Order 66 toys in McKinney, Texas, a store famous for rare Star Wars collectibles. They explained how Star Wars changed their business, elevating their once humble vintage toy store to international acclaim. Run by Jeff Durrezzo and his son Josh, the store boasts an incredible collection of vintage figures, comic books, legos, and even reels of film from the original trailers.

After several unexpected turns in the early days of their business, they didn’t realize they had something in Order 66 until a different kind of customer walked through the door. “Beckett writes price guides for baseball cards, football cards, hockey cards, everything.” Jeff explained,” They are stationed out of Dallas, Texas. I’d never put that together until one day Beckett’s senior vice president walked in and we started talking.  His name is Bill Dumas and he said ‘We need to reinvent this. We need to put out another star wars price guide, and we haven’t done this in years, so how would you guys like to be involved?’ and at that point myself and my son Josh became the official pricers of all things Star Wars. It was fantastic.”

He went on to explain how together, he and his son devised an algorithm for Star Wars pricing, and how it is used to this day. “AFA means is Action Figure Authority, they are out of Atlanta Georgia.” Jeff explains,” They give three different grades to an item. Now one of the grades is for the card back, one is for the bubble or the ‘blister’, and one is for the figure. Those three grades combined give you an overall number. The way its set up is from 40 and below they really don’t use, and ninety and above they use on extremely rare cases… for you to find a piece that is an eighty-nine or a ninety grade is fantastic, that’s like the best of the best.”

At this point his son Josh Durezzo interjects, eager to illustrate why some figures are so valuable.

“An eighty is considered mint.  The grading scale is in five point deviations, so an eighty-five would be close to perfect—nothing has ever been graded higher than a ninety in the history of their company. They had one item that was graded a ninety-five, but on further review it was knocked back down to a ninety. But that was a GI Joe piece, no Star Wars piece has ever been graded higher than a ninety. Now, the way that you would get a perfect grade is it would have to be assembled by hand, cut by the most precise machine you’ve ever seen, the figure would have to be hand painted perfectly, hand sculpted perfectly, by like, a heart surgeon.” Josh and Jeff share a glance and laugh,” Every part of it would have to be perfect and that just doesn’t happen. When they are using automated processes and pushing through hundreds of thousands of action figures, every unit is going to be a little off.”

So if you are looking for the unique Star Wars collectable, if you need a valuation or you are interested in selling you X-Wing co-pilot visit us at Kersten’s Antiques! Were always online and at your fingertips, no need to travel 1.917e+13 miles (1 parsec) to get there!