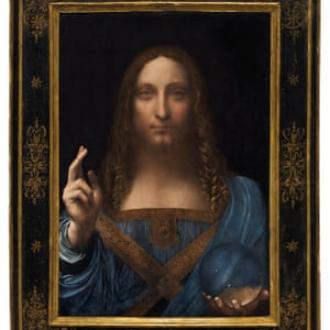 For the record-breaking price of $450 million, an auction sold the Salvator Mundi painting to a close friend of Saudi Crown Prince Mohammed bin Salman. Many believe that this painting of Jesus Christ is an original work from Leonardo da Vinci. Despite the buzz that this painting generated when sold in 2017, its location since has remained unknown. It was supposed to be included in the collection housed at the Louvre Abu Dhabi in the United Arab Emirates. However, the New York Times recently reported that it is still absent from this museum. Staff members do not know where it is and neither do officials at the Louvre in Paris, which has allowed the Abu Dhabi Museum to use its name.

As it is widely known, da Vinci’s Mona Lisa became famous because it (or she) was stolen from the Paris Louvre in 1911 and finally found two years later in 1913. Oxford historian Martin Kemp likens the Salvator Mundi as “a kind of religious version of the Mona Lisa.” In 2017, the Louvre Abu Dhabi tweeted that the Salvator Mundi would be coming to the museum. The fact that it still has not arrived to be put on display raises questions surrounding the paintings authenticity as a true da Vinci and also strikes parallels with the Mona Lisa’s disappearance over 100 years ago.

The Louvre Abu Dhabi’s keenness to display the Salvator Mundi painting and the establishment of the Louvre Abu Dhabi point to a shift in location for global cultural hotspots. For centuries, European cities, especially Paris, were hubs for all things high culture from massive art collections to operas and settings for literature. However, as more countries like those in the Middle East and East Asia rise economically onto the world’s stage, renegotiations of power among different nations are coming in the form of cultural holdings. For example, the Louvre in Paris receives anywhere from seven to ten million visitors each year. The Louvre Abu Dhabi has already received over one million visitors after only being open for one year. But the missing Salvator Mundi has thrown a wrench in the finalizing of their collection.