Montana and Yellowstone: Preserving the History of the Old West 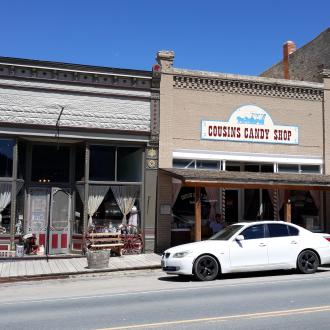 Western themes have remained popular in North American culture as well as in international depictions of American history. Outside of John Wayne films, images of cowboys and Indians are perhaps even stereotypical ideas of the western United States, or even the entire country itself. However, these themes are cherished in contemporary society as well. Items and curios from frontier and pioneer life find themselves displayed in public places (especially in Cracker Barrels) and in museums. This could not be truer than in Montana.

After the Lewis and Clark explorations that began in 1803, mining and gold prospects brought people to the west in the mid-1800s. By the 1860s, towns emerged. Bozeman was founded in the Gallatin Valley surrounded by mountains. It is now one of the fastest growing cities in the United States. It retains its small-town charm, however, with downtown on Main Street and preserved landmarks like the Baxter Hotel.

Gift shops, restaurants, and art galleries line Main Street. Antique shops like Sassy Sisters, Downtown Antiques, and East Main Trading Company make for a thrill of finding something unique. Cactus Records is a quirky shop with old and new records along with accessories and gag items. It is located near Burger Bob’s restaurant, which is the closest I’ve gotten to visiting the fictitious Bob’s Burgers, complete with puns on the menu. Painters and photographers have no shortage of inspiration from the land around them in Bozeman. Multiple artists display their work in galleries on Main Street as well.

About 45 minutes from Bozeman is Virginia City. This former mining town has been preserved for a step into the 1800s. Each building has a plaque detailing which stores or businesses previously existed there. Multiple building interiors have been redecorated to how they originally looked. Some display real stagecoaches and household items from the era. The Cousins Candy Shop is a must for candies from the 20th century and antique stores include Western collectibles. Wooden cabins from the 1800s are still standing against the backdrop of the mountains. Between Bozeman and Virginia City, look for sandy places on the edges of the road. There are bits of garnets in these roadside banks. Garnets, sapphires in Helena, and the gold that originally brought people to Montana all contribute to its nickname the Treasure State.

The Museum of the Rockies displays more history of frontier life in Montana. Montana State University is next to the museum and partners with it as well. The museum includes items of daily life as people settled west in the United States. It details how these settlements came into contact with Native American tribes and how the customs of these tribes are now being preserved as cultural contributions. Past Hollywood western films often depicted Native Americans as the dangerous enemies to the cowboys and explorers, but thankfully history is now being more accurately told. The museum also has a planetarium and complete reconstructions of a T-Rex and a triceratops. There are entire fossils of dinosaur body parts and mammoth tusks that were all found in the Rocky Mountains of the United States, if not found right in Montana.

Find a more unique landscape than in Yellowstone National Park. I don’t know if I can think of one. Millions have marveled at it since its discovery. After traveling with Lewis and Clark to the Pacific, John Colter was the first non-Native American explorer to document Yellowstone. Many did not believe Colter’s reports on the area at all. Nevertheless, it became the first National Park in 1872. Bozeman is two hours from Yellowstone National Park’s north entrance and three hours from its west entrance. Renting a car to get through Yellowstone is practically a must as there are long roads in between the park’s attractions, but there are guided tours and hotel lodging right inside the park.

Most people immediately think of the Old Faithful geyser when they think of Yellowstone. However, there are innumerable geysers and boiling thermal pools bubbling and steaming all around the paths from Old Faithful. The other geysers are just not as well known because they don’t erupt so – you guessed it – faithfully. Every 60 to 90 minutes to be exact. The pools have the iconic bright orange edges and deep blue interiors that make Yellowstone so vibrant. The wooden walkways are there for everyone’s safety given the boiling temperatures of the pools, but they also make for better accessibility.

When driving away from the Old Faithful lodge, there is the Yellowstone Lake with West Thumb, which also features thermal pools, and the Canyon Village to the north. There are paved roads between all of these locations and bison herds along the valleys. Canyon Village includes two waterfalls, Upper and Lower. The Brink of the Lower Falls point takes viewers down a long winding trail to the top of the waterfall overlooking the huge canyon. Lookout Point further north is another popular stop to view the falls. The multiple viewing points of the both falls require some hiking but are worth it. On the way out of Canyon Village toward the north entrance of the park are the Mammoth Hot Springs, which are thermal pools that cascade down near the exit of the park.

At Yellowstone’s north entrance and border with Wyoming is Gardiner, Montana. This tiny town houses hotels and the best restaurant I have ever visited: The Raven Grill. Get the alfredo and wish that there was a Raven Grill closer to where you live. Though Gardiner has hotels for park goers, as does West Yellowstone, summer is the busiest time for tourists. Keep in mind that hotels and rental cars for visiting at this time of year need to be booked far in advance. Also keep in mind that Yellowstone is miraculous at any time of year. Just dress for some snow if it is not summertime.

As for wildlife, it is safe to say that more than just humans enjoy Yellowstone. Elk, beavers, deer, bison, otters, countless birds, wolves, black bears, and even moose and grizzlies live in the park. Grizzly sightings are more common in the spring than during other seasons. However, they are not often near the paved roads that traverse through the park. The campgrounds or hiking trails are in better areas to see wildlife habitats. However, park rangers are not kidding when they say to never ever go near these animals. Not even elk or bison. Keep a watch out for animals crossing roads as well. Some bison will get rather close to parking areas near the park. Luckily in the lots, there are places to stay safe in the rare event that one is angry. Multiple animals in Yellowstone are protected by the Endangered Species Act. This Act saved bison and grizzlies from extinction in the continental United States. Supporting the Act means being safe in the park and respecting the animals. After all, they were there first.

Sometimes people proudly refer to Montana as “the last best place.” Its classically western history and vast natural landscapes live up to this slogan all year long. So next time you’re looking for some adventure, go a bit further north than Colorado. Montana and the land around Yellowstone (which is technically in the corner of Wyoming) is quaint, less populated, but still urban enough to not be stuck out in the middle of nowhere. Get your antiquing on while you’re there too while you explore some western frontiers.