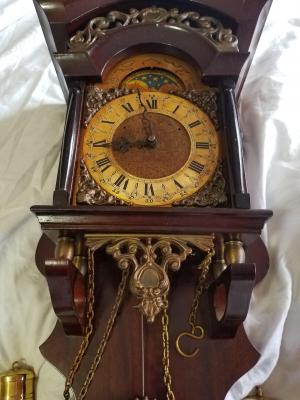 Description
Case: 19" x 9" x 5” stained mahogany wall clock case with concave molded, double break-arch hood surmounted by three Dore bronze rococo urn and spire finials. There is open pierced gilt fretwork between the two arches in 'C' scroll, pinwheel and heart shape forms. There is an arched brass alloy dial just below flanked by attached tapered half colonnettes. At the back of the hood and proceeding down from the pediment of the clock case is a solid mahogany backboard with serpentine shaped sides which gradually taper down to a round point at the bottom of the backboard well below the hood section above it. The bottom of the dial rests on a protruding horizontal cornice supported at the sides from below by hollowed out circular corbels resting against the backboard. At the center of the cornice, actually hanging from it is a Dore bronze foliate patterned mask for ornamental purposes. the mahoganized backboard also serves as background for the arc of the sun-ray pendulum bob as it swings and the descent of the two brass weights. the back of the case bears a jeweler's label. Dial: Appears to be an arched brass alloy dial with a gilt or silvered Roman hour chapter ring, scalloped with a minute ring to the outside with Arabic markers placed every five minutes, a quarter hour closed ring to the inside of the hours, gilt textured dial center with embossed foliate patterns, Chippendale style fenestrated steel hands, applied Dore bronze cherub head spandrels in the four corners of the main dial. In the lunette there is a revolving moon dial with figurative clouds on the metal arch above and engraved sun-rays etc. in the two hemispheres below. The dial is unsigned. Movement: Not clearly seen (seen through the sidelights) and appears to be a solid rectilinear brass plate movement connected by steel cuffed tapered pillars. It is an anchor type escapement powered by the descent of the two brass ringed canister weights which are manually pulled up by their chains onto the sprocket gearing within the movement plates and this is how the movement is wound up Also, the time and strike trains should be placed one in front of the other rather than side by side as in American or English movements. These were usually 30-hour movements or one day clocks. Striking is usually on a bell, on the hour and half hour.  the sun-ray pendulum bob swings below at the back of the movement. Condition: Appears to be in excellent condition.  The clock is  functional. I do not see much in the way of age in the various parts of the clock except perhaps for the conical brass weights which do seem to have some marks and pitting.
Date
Late 19th-20th century
Length
19

The extremely popular (specifically in Friesland) regional wall clock of the late eighteenth and early nineteenth century was the so called staartklok (or tail clock). In common with the Amsterdam longcase clock the staartklok has a longer pendulum and an anchor escapement. The Staartklok was developed in the late-1700's; The main ornamentation typically consists of brass figures above the hood. In Dutch, the word Staart means "Tail" which refers to the clock's longer wooden case backing and sliding tail cover which encases the pendulum, though the swinging bob is usually seen through a glass lenticle built into the cover. The dials of these Frisian clocks are painted.