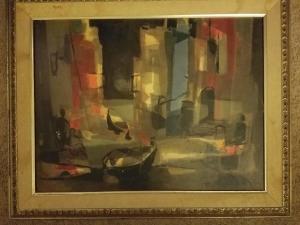 Artist:  Marcel Mouly (1918-2008) was a French painter associated with the Fauvism movement of the early 20th century. His colorful, abstracted paintings were influenced by both the Cubism of Pablo Picasso and the bold palette of Henri Matisse.