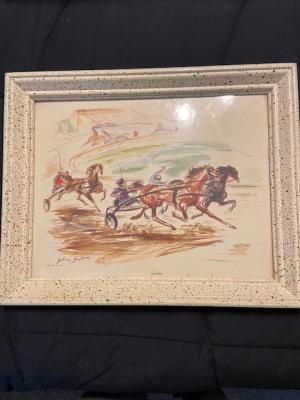 John August Groth was born February 26,1908 in Chicago, IL. Education: Art Institute of Chicago; Art Students League. and with T. Geller, A. Blanch and Grosz John Groth made a career as a painter and illustrator by focusing on sports and war. He captured the action-packed scenes by witnessing the events first-hand and sketching his experiences. Groth used a style technique called “speed line,” in which he sketched his subjects using rough, unperfected lines and filled the lines in with watercolors. Upon describing his technique, Ernest Hemmingway, whom Groth spent time with during World War II, wrote, “None of us understood the sort of shorthand he sketched in. the men would look at the sketches and see just a lot of lines. It was a great pleasure to find what fine drawings they were when we got to see them.” He also was a artist-correspondent during the Korean and Vietnam wars. Groth was also the art Director for Esquire magazine. Member : Society of American Etchers; American Newspaper Guild; Society of Illustrators; Associate Member of the National Academy of Design; American Water Color Society. Exhibits : F.A.R. Gallery in New York City; Dayton Art Institute; National Academy of Design; Whitney Museum of American Art; Corcoran Gallery of Art; 1939 Worlds Fair in New York. Positions : Art Director at Esquire 1933 - 1937, Parade Publications 1941 - 1944; War Correspondent for Chicago Sun 1944; American Legion Magazine 1945; Artist-Correspondent in Vietnam 1967. Teacher at Art Students League.